The symbols of white supremacy have loomed large in Jacksonville, as is the case in communities throughout the South. The presence of confederate flags during Ax Handle Saturday, along with a sculpture of a confederate soldier standing witness to the madness, illustrates the tension between a racist past and those who were putting their lives on the line for change.

From the founding of our city, the names and visages of those in power in the dominant race, class and gender have tyrannized the landscape. Confederate soldiers and enslavers have their images stationed tall over public parks, and their surnames on our streets and chiseled over the doorways to our schools. Many, if not all, of these white supremacist objects were the physical manifestations of the Lost Cause narrative and a response to the passing of laws that would get us closer to the constitutional concept that all are equal.

Sixty years later, some schools named after members of the KKK and the confederacy are being renamed; the “Take ‘Em Down” movement has spurred the removal of some statues; and, the infamy of the Hemming name is being replaced with the reminder that James Weldon Johnson is a favorite son.

Yet, throughout our region the rhetoric and violent response is real and the causes and symbols stubborn. Many say that the removal of these symbols is erasing history or that it denies communities the opportunity to speak the truth. If the experiences before, during and after Ax Handle Saturday teach us anything, it is that the presence of these symbols did little to teach truth but instead cast an oppressive shadow of lies over our city. 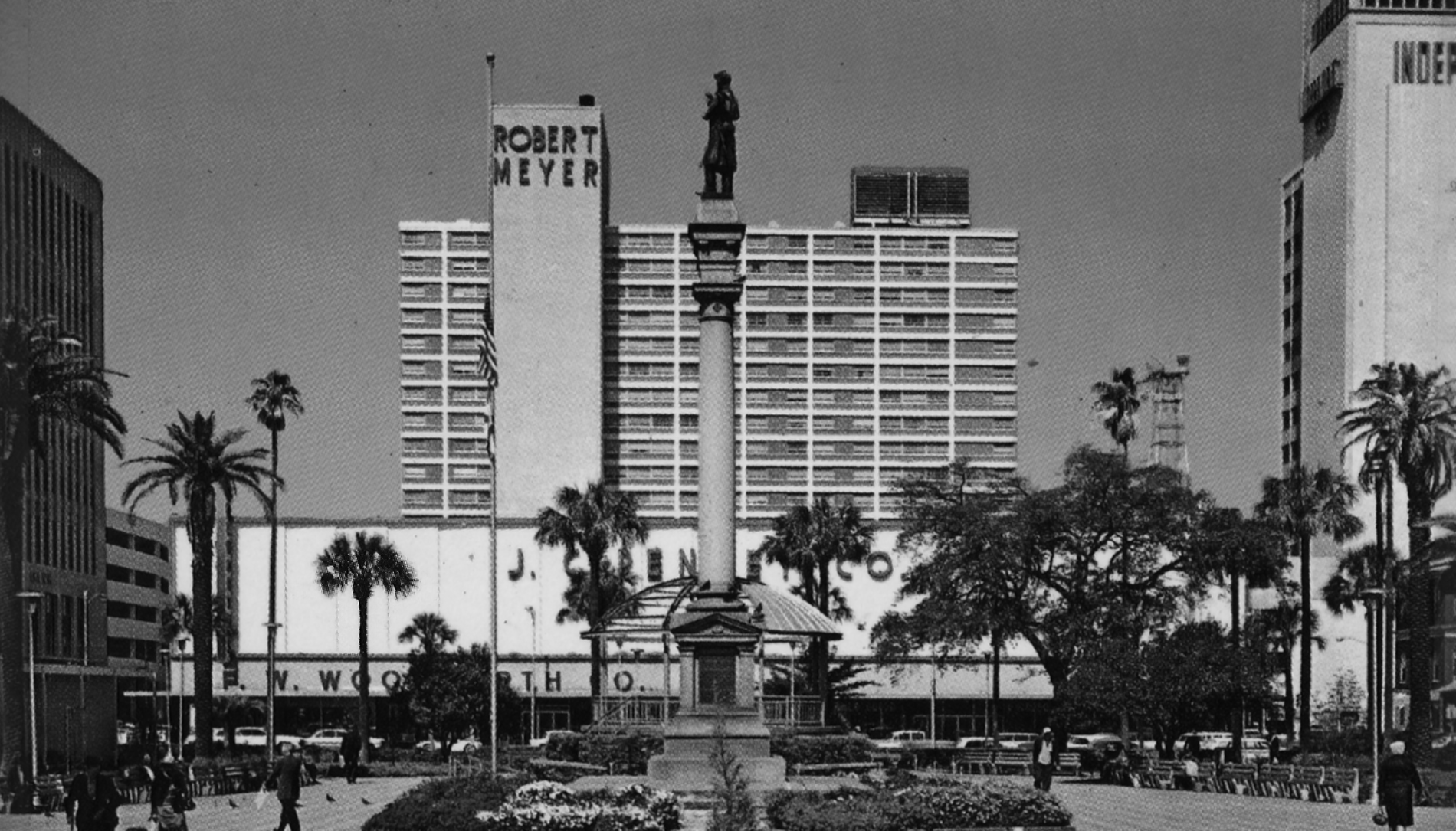 In the middle of Hemming Park, during Ax Handle Saturday, stood the Confederate Soldier Statue that gazed upon the white mob wielding ax handles against any Black person they saw in the downtown vicinity.  He was installed in the heart of the city in 1898 as part of the Lost Cause narrative rampant in the South. 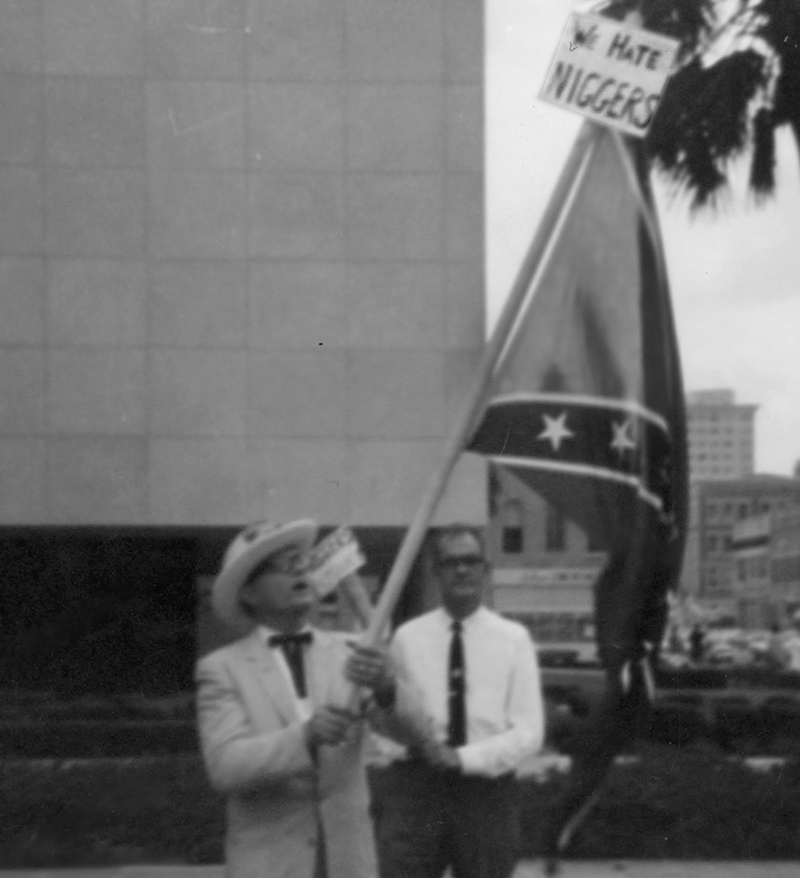 Warren Folks, an avowed segregationist, is seen carrying the Confederate flag and a sign reading “WE HATE NIGGERS”. He will later visit Bethel Baptist Institutional Church, extend his hand in a moment of goodwill and call Hurst his “friend.”

“Though insulting to the Black community, the political explanation was that these Civil War generals were Southern heroes fighting for their heritage and their way of life.”

STATISTIC | According to the Southern Poverty Law Center, over 1,500 monuments still stand, including named streets and buildings. 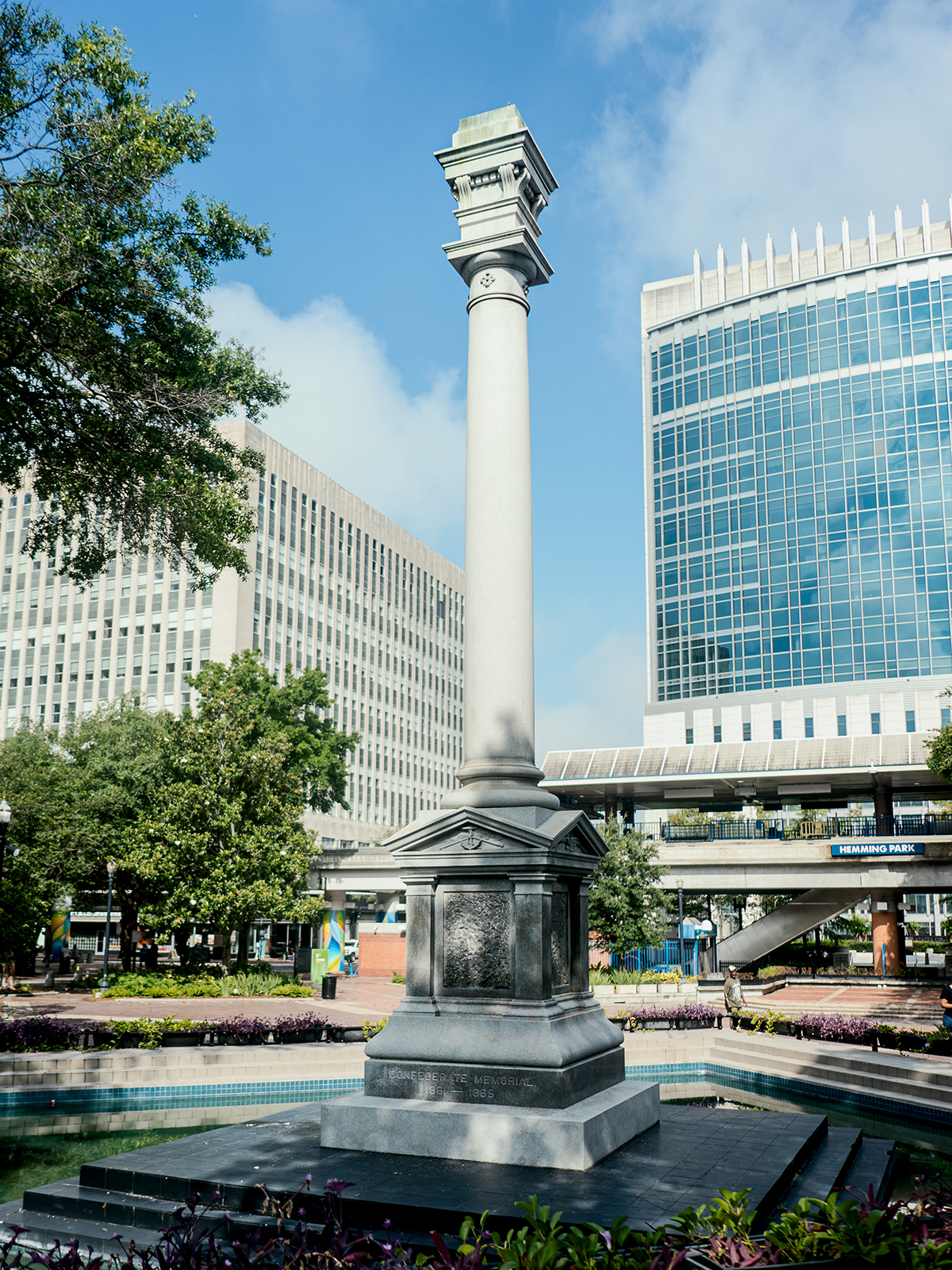 Photo by Matthew Bennett of empty pedestal that once held a confederate soldier in a park that was once named Hemming Park and is now James Weldon Johnson Park. 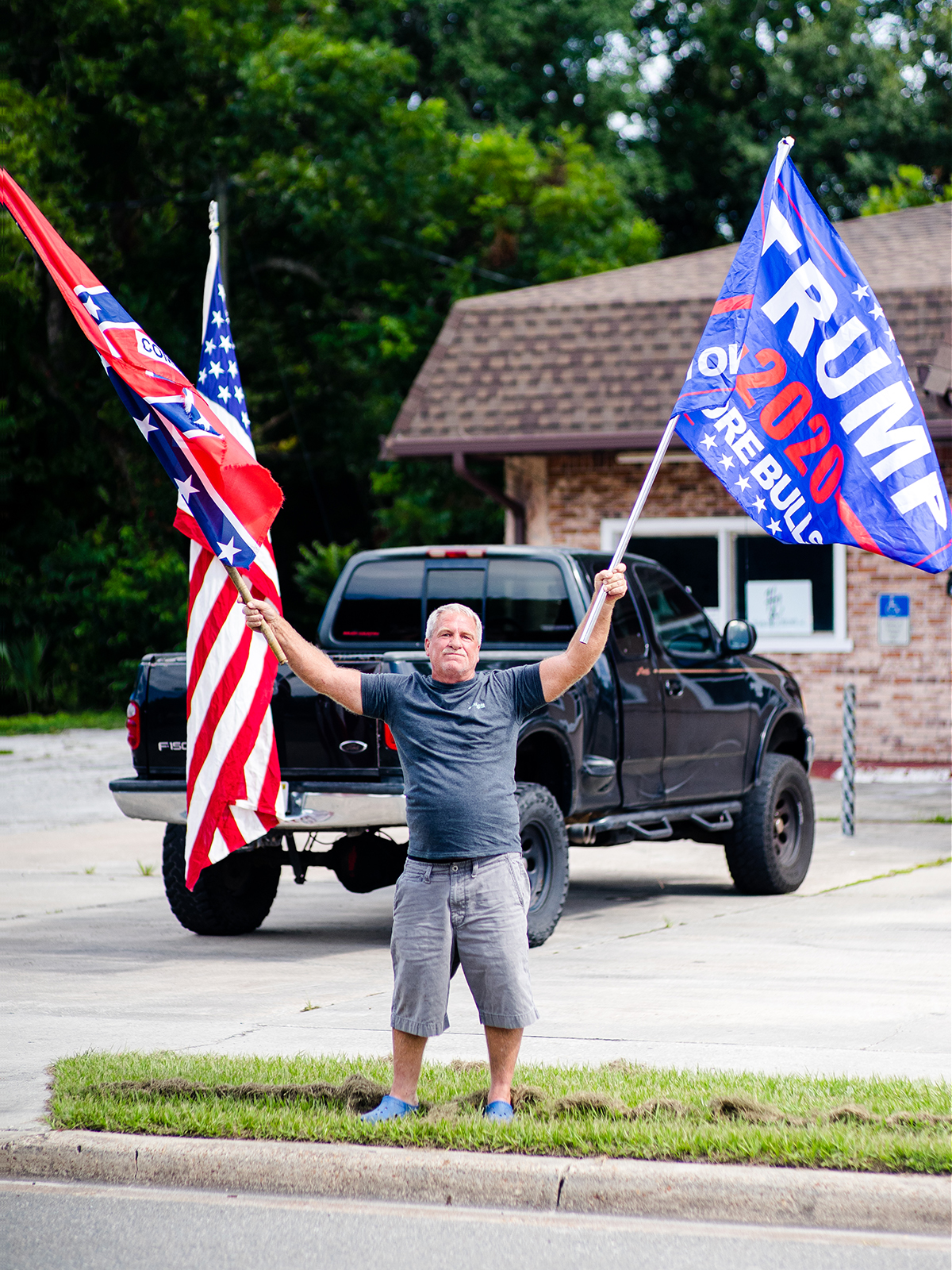 Photo by Matthew Bennett from Summer 2020 protest in Northeast Florida. 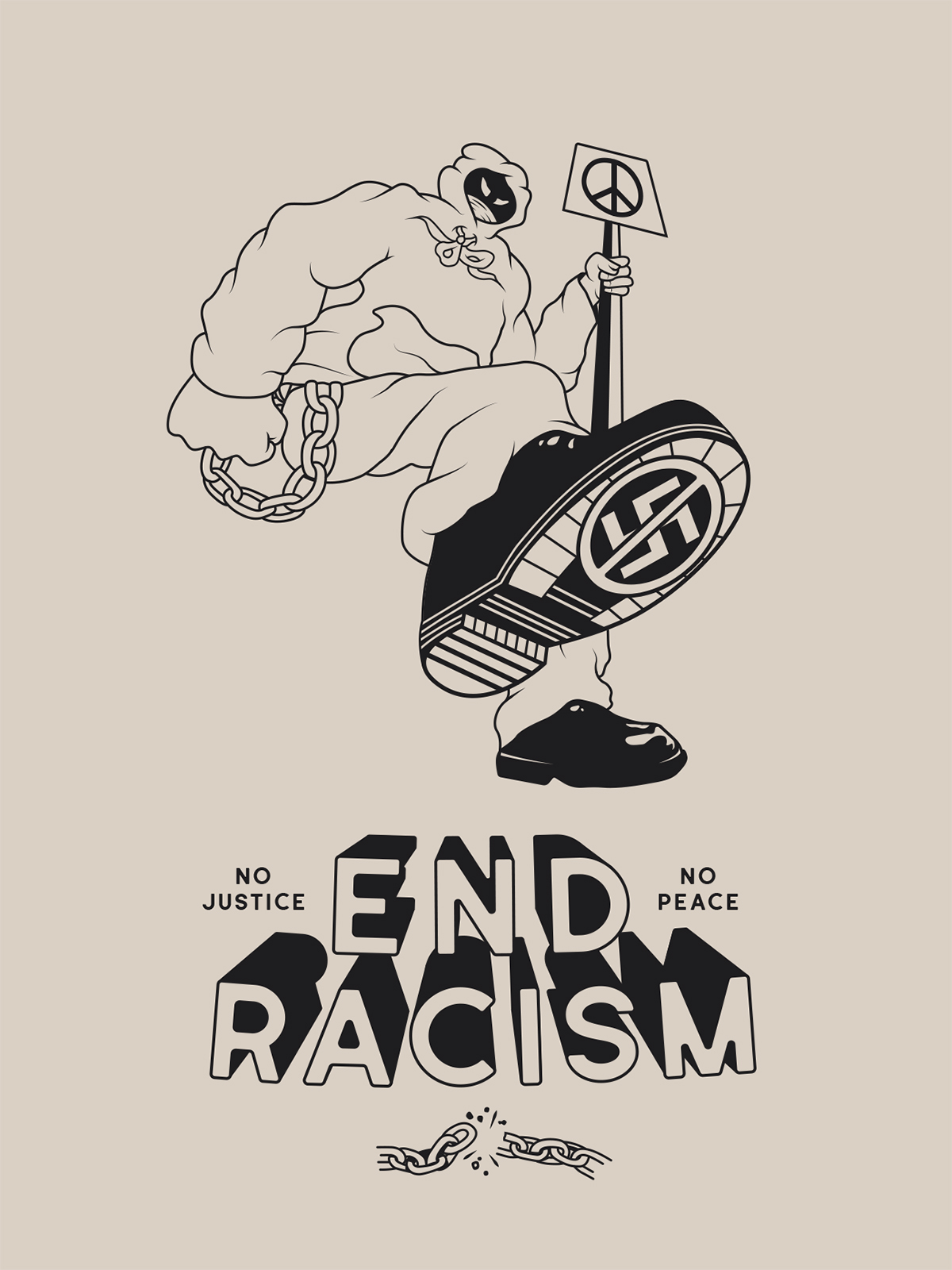 With this piece Ryan May captures the complex energy of the universal protestor. A single image for revolutionaries to rally behind in harmony against all oppressive forces. 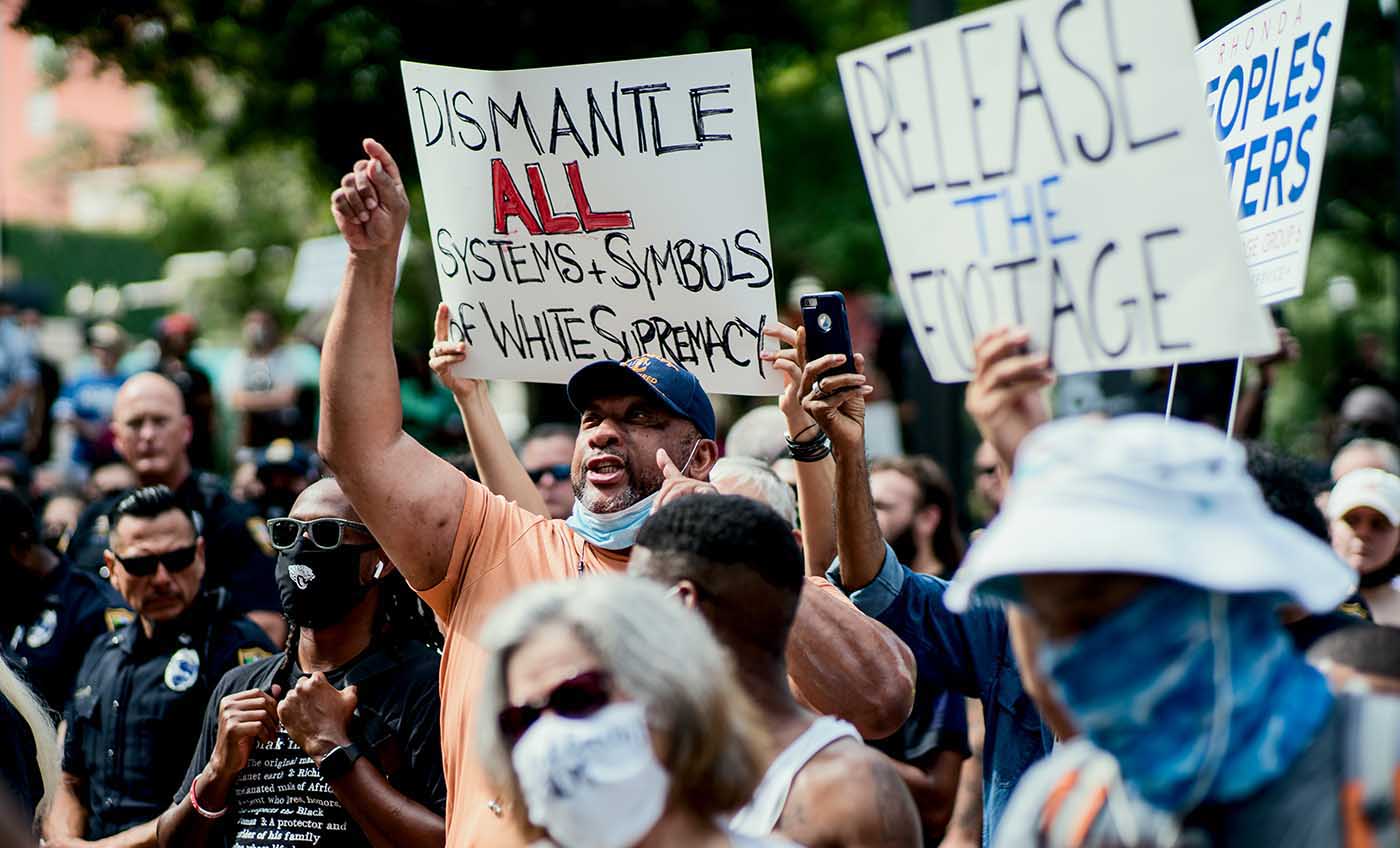 Photo by Matthew Bennett from protest in Summer 2020.

“The removal of statues and names that represent white supremacy is one step towards reconciliation.”

STATISTIC | The Confederate monument was partially removed from the heart of Jacksonville on June 9, 2020. In 2013, Forrest High School was successfully renamed.Ten additional Civil War monuments and several schools named for confederate leaders, are in the process for removal. These join the more than 60 monuments that have been removed since the demonstrations sparked by George Floyd’s murder.