As is so often the case, taking a stand for racial justice is often met with intensely violent backlash from white people looking to preserve the status quo. The sit-in demonstrators, who were committed to non-violence, were first taunted, then harassed, and eventually physically assaulted on the regular by white business owners, diners, and shoppers.  After a summer of lunch counter demonstrations at long-gone stores such as Woolworth, Kress, and Cohen, the sit-in that occurred on August 27, 1960 at W.T. Grant resulted in one of the most violent days in Jacksonville’s history. Youth members of the NAACP who were occupying lunch counters, along with other Black terrified shoppers, workers, and residents, were chased and beaten on that bloody day we now call Ax Handle Saturday. Approximately 200 angry white men, armed with ax handles and baseball bats, committed heinous acts of terror, beating Black people indiscriminately. Some of the men were members of the KKK, many wore confederate symbols, and were supported by complicit shopkeepers and apathetic police officers. As the day progressed, violence spread throughout the community as Black people came to defend their neighbors, and white people felt emboldened to continue what was started in the heart of downtown earlier that day.

This infamous day, blacked out in the local press, caught the attention of a nation reeling from white mob violence that came in seemingly endless forms — burnings, bombings, beatings, shootings, and lynchings — all in order to keep schools, buses, government buildings, neighborhoods, workplaces, and lunch counters from being integrated. Most of the demonstrations and violent counter-demonstrations were similar. Young Black men and women peacefully demanding equality were met with hateful actions at the hands of white mobs, under the accepting gaze, and active participation, of leaders, business owners, and police.

This brand of racial terror persists today. Vigilante justice, police brutality, and systemic racism continue to attempt to uphold white supremacy, in its many forms. Trayvon Martin. Jordan Davis. Eric Garner. Sandra Bland. George Floyd. Ahmaud Arbery. Breonna Taylor. Jacob Blake. There are too many Black Lives brutalized in the past five years than can possibly be named here. White violence against Black Lives is pervasive in its most violent iterations and in the systems that stand in the way of both justice and equity.

The rise of neo-confederates, the continued existence of the KKK, those who counter with “All Lives Matter”, a mayor who falsely proclaims ‘One City, One Jax’, and the policies and practices that play out in schools, governmental bodies, healthcare institutions, and board rooms are all part of the equation. White backlash has been alive and well during the Jacksonville-area protests of 2020, leading to tear-gassing and illegal arrests of Black Lives Matter demonstrators and physical clashes in demonstrations in almost every city and small town in the region…even while those demanding justice are more diverse in age, race, gender-orientation, religion, and class than ever. 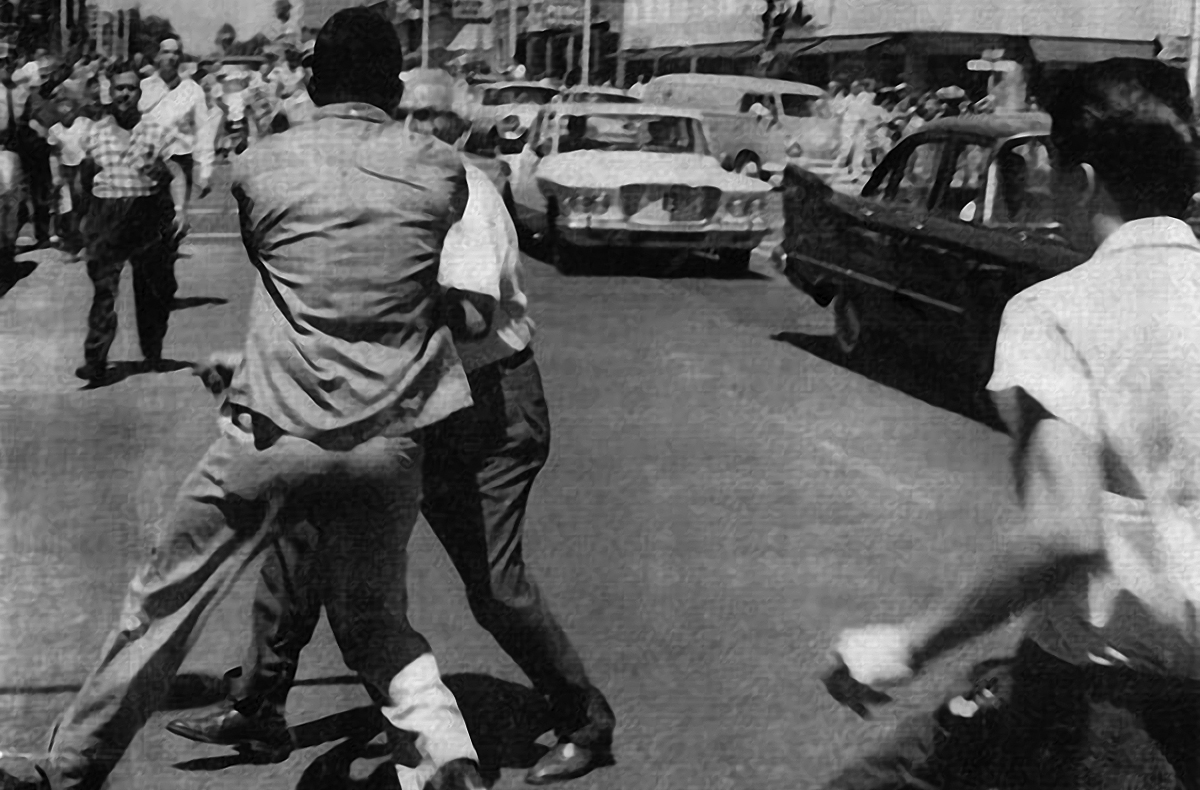 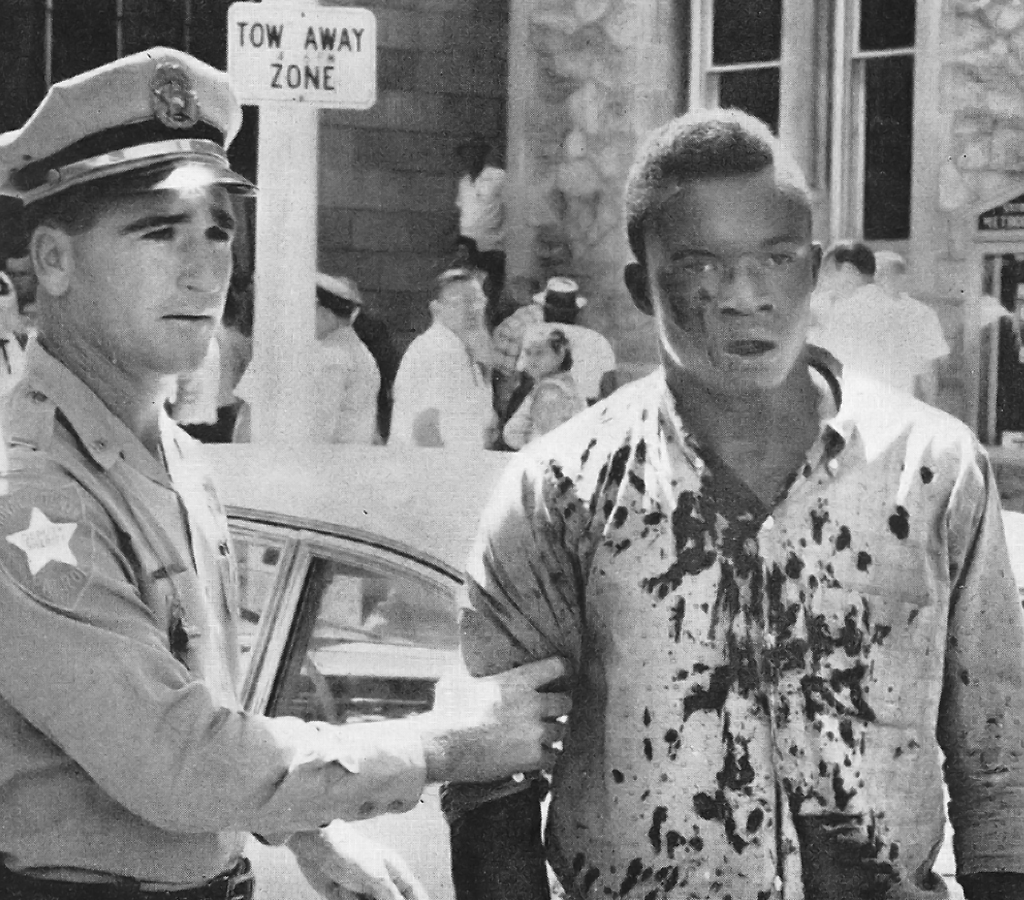 Charlie Griffin’s shirt is drenched with blood following the attack by the angry white mob wielding ax handles. The Life magazine Sept. 12, 1960 issue shows a photo of Griffin standing next to a policeman during Ax Handle Saturday.

Although the Florida Times-Union didn’t cover Ax Handle Saturday, other press were on hand to capture images of the angry white male mob inflicting hurt and harm on any Black person or white person who appeared to help Black people, in downtown Jacksonville on that fateful day Aug. 27, 1960.

Ax handles are solid pieces of wood that come in various sizes, weights, and lengths; i.e., 32-36 inches for 3- to 6-pound axes. Surviving the onslaught of the ax handles being wielded by the angry white mob became primary concern for Hurst and others. Some fought as best they could and others tried to run for safety. It was later noted that there were about 200 white males wielding ax handles and baseball bats.

“There could be trouble today.” 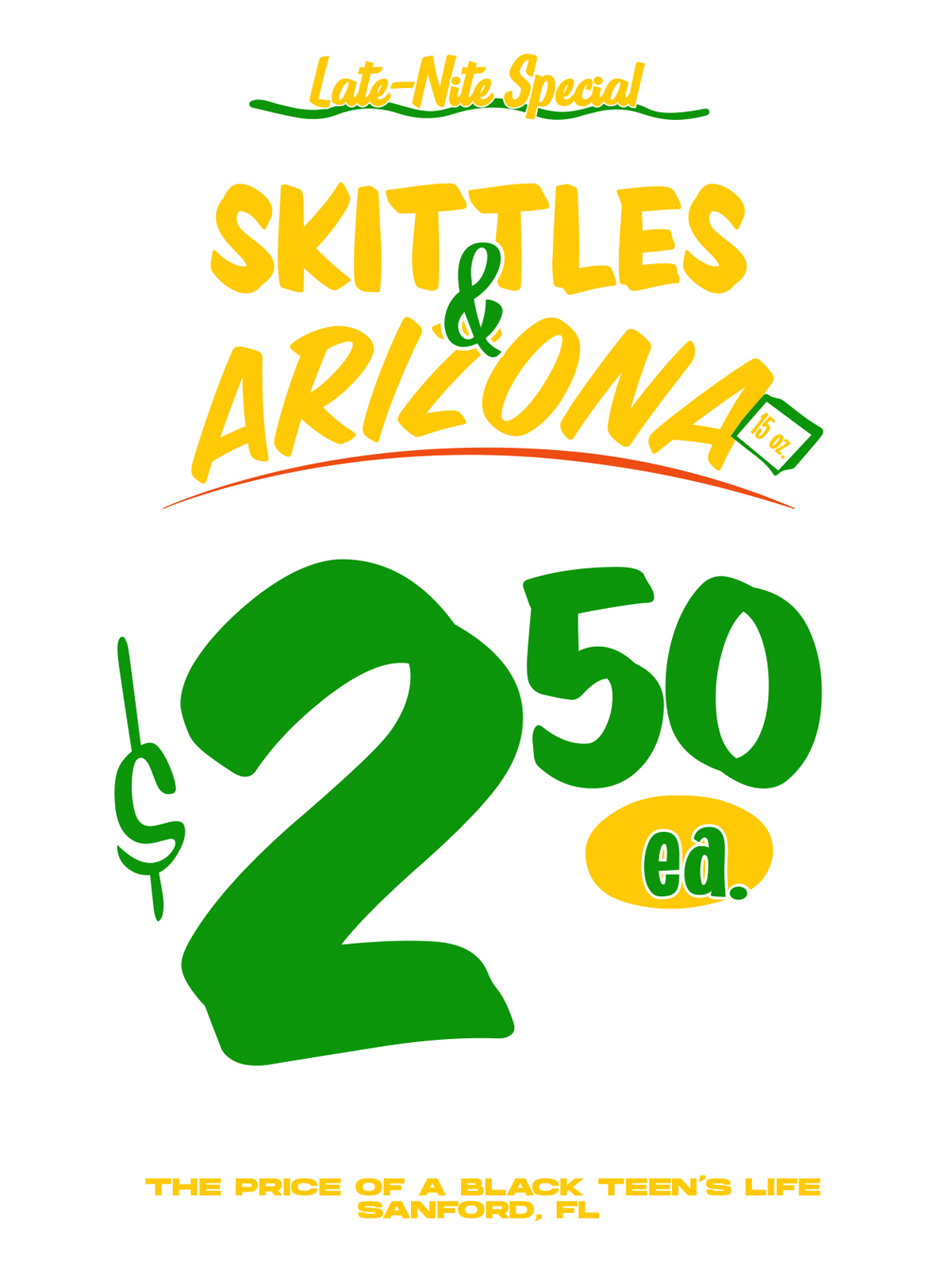 “The Price of a Black Teen’s Life” 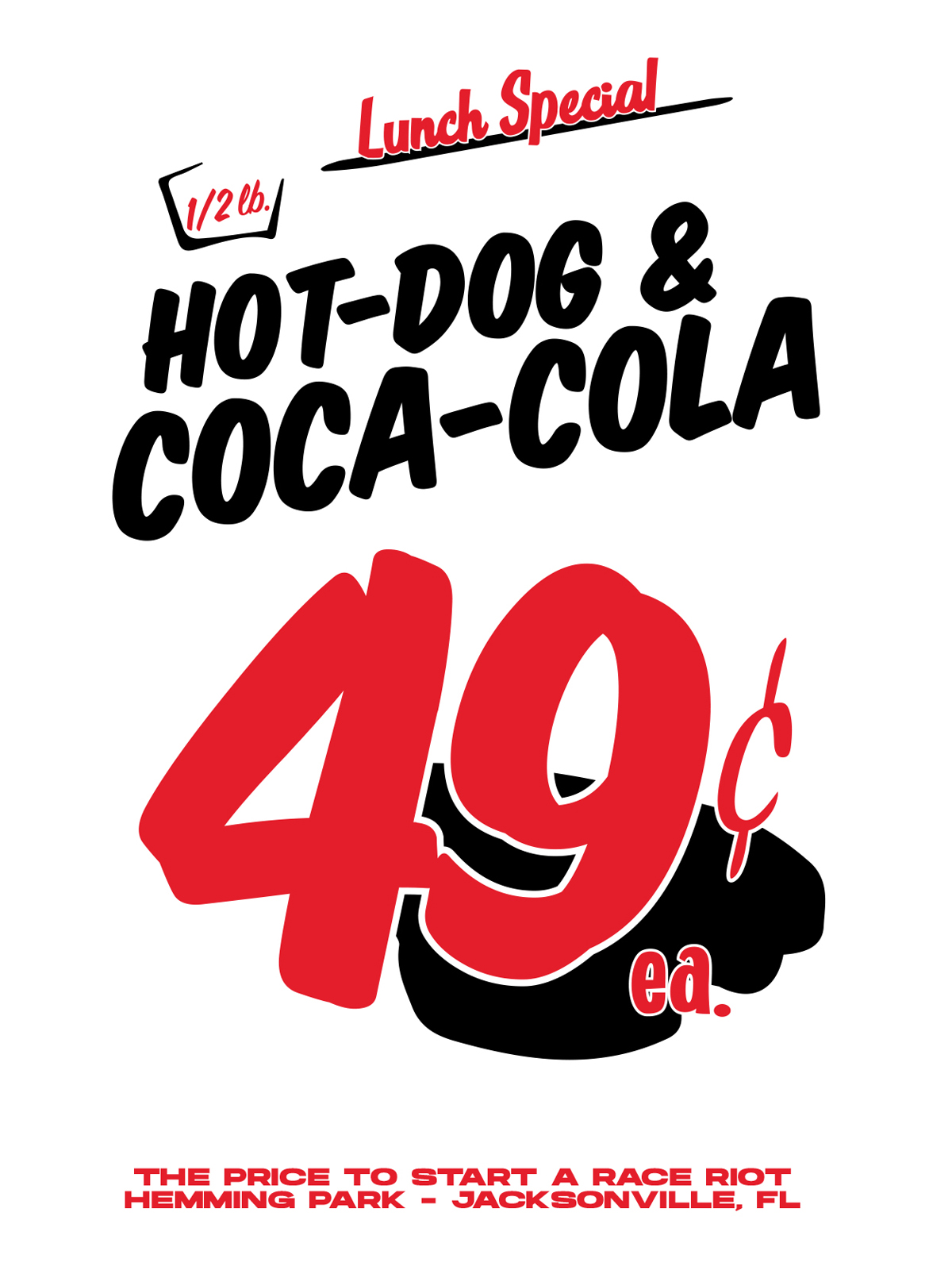 “The Price to Start a Race Riot”

“The Price of a Black Man’s Life”