To state the obvious, education plays a significant role in the life trajectory of an individual, making it the basis for any collective movement. From the legal segregation of schools prior to the Supreme Court’s Brown vs. Board of Education decision in 1954, to a decades-long attempt to desegregate under court oversight, to the continued lack of consistent investment and representation, there is evidence of both progress and neglect over the 60 years.

As schools grapple with remote learning and the challenges of brick and mortar education during a pandemic, the racial and economic divides still exist in high relief. The heroic efforts of teachers, standing on the shoulders of the great Rutledge H. Pearson who played a prominent role in the story of the sit-in demonstrations and the lives of the young people who led them, are still prevalent in a system that consistently perpetuates racism and inequities locally and across the country.. 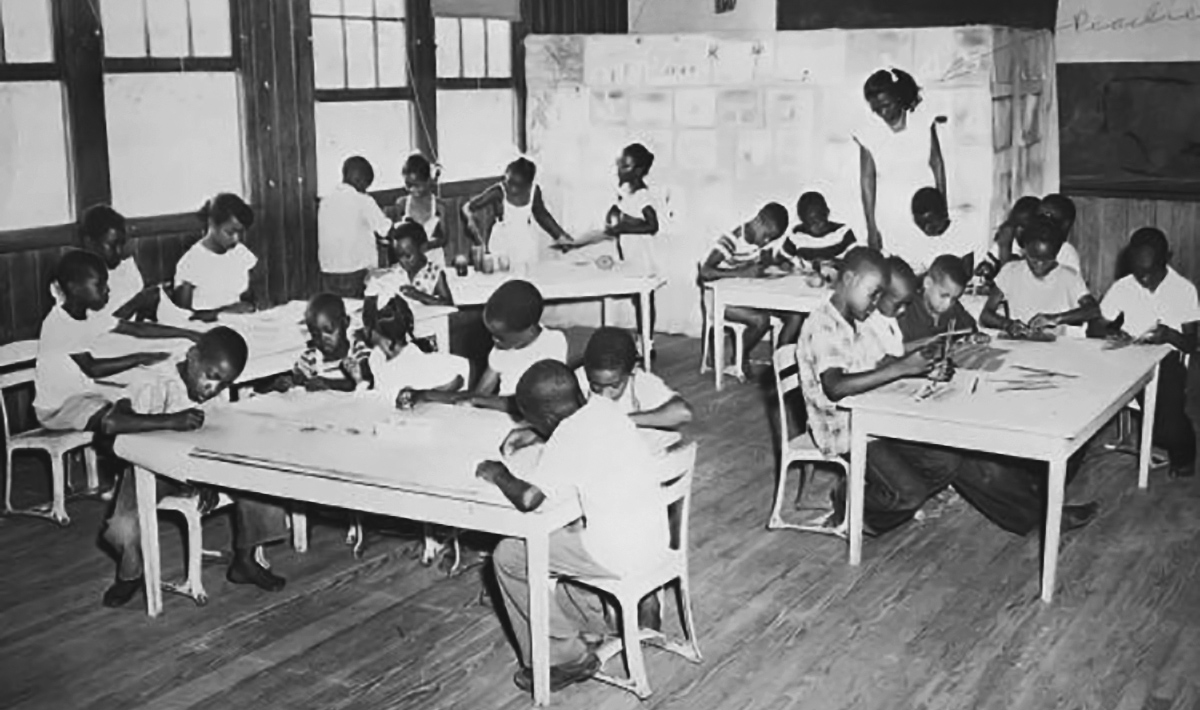 Oakland Grammar School #102. The community of Oakland (Eastside) was platted in 1869 and annexed into the City of Jacksonville in 1887. It emerged as a working-class community with largely African-Americans employed in the sawmills and on the docks. This photo of Oakland Grammar School #102 from the late 1950s, displays a typical classroom during the era shortly before Ax Handle Saturday.

“We conclude that in the field of public education, the doctrine of ‘separate but equal’ has no place.”

– Supreme Court decision Brown vs. Board of Education of Topeka

Rutledge H. Pearson as featured in Jet magazine in 1964. Pearson was an educator, a leader in the Jacksonville NAACP, and a human rights activist.  As the liaison to the NAACP Youth Council and teacher of history to many who would lead the sit-in demonstrations, Pearson played a larger-than-life role in the Civil Rights Movement in Jacksonville and beyond.

“Here was a Black schoolteacher who ignored and refused to use the approved…American History textbook that excluded many relevant contributions by Blacks … Mr. Pearson personified courage” 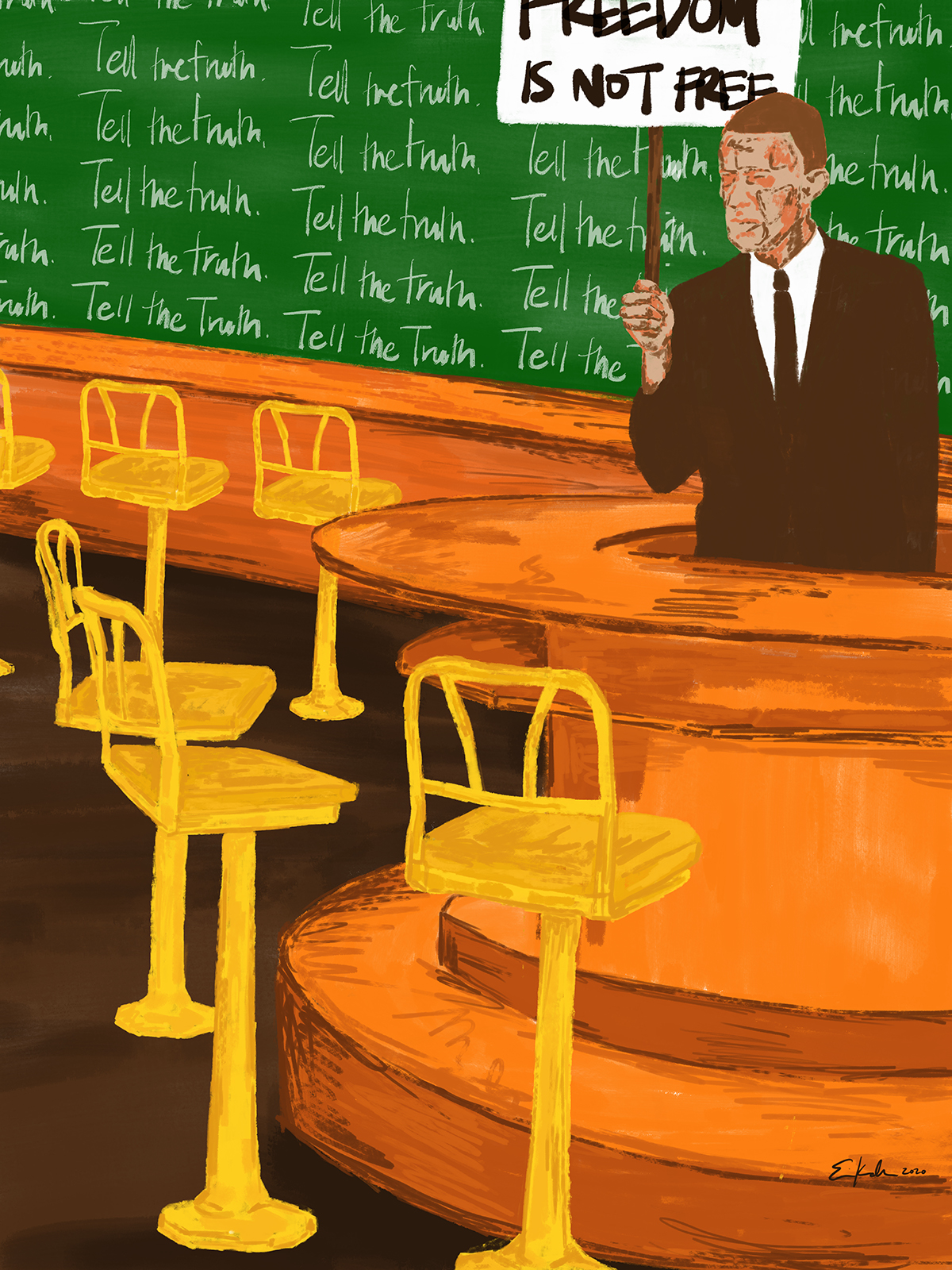 This contemporary work depicts Rutledge Pearson, holding a picket sign with his famous quote, standing at the head of both the classroom and the Woolworth counter where his students would stage their sit-ins. The seats are empty making space for a new generation of activists. The board reads, “Tell the Truth.” A directive written in old school classroom punishment style to remind us that these stories need to be told.

This work fervently displays a call for collective solidarity by utilizing a quote from Rutledge Pearson. This marriage of vintage imagery and a powerful message urges the community to stand strong together. 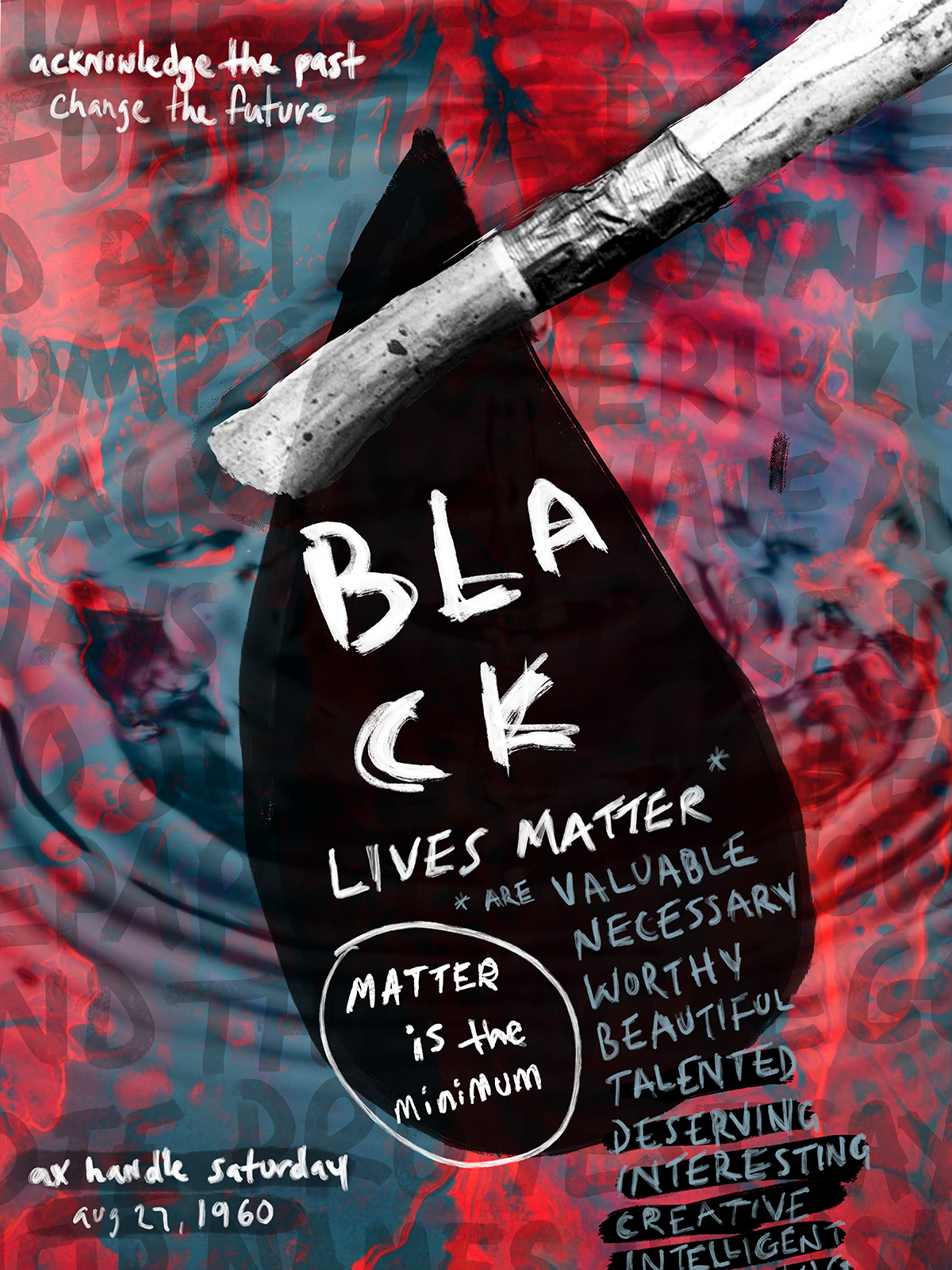 This poster design commemorates the past with its nod to Ax Handle Saturday and acknowledges the current call for not only stating that Black Lives Matter, but that ‘mattering’ is the minimum.  It is a recognition of the brilliance and importance in centering the experiences of Black people.

“History books should honor the truth, expose the insidious destructive lie of less than, and celebrate the hope and possibility that exists in everyone.  The constant denial of truth is epistemic injustice and epistemological violence – the methodical, systematic perpetuation of Blacks as less than or invisible – and is a form of educational malpractice and academic apartheid that preserves power and White supremacy.”

STATISTIC | Although Brown vs. the Board of Education called for the desegregation of schools across the country in 1954, Duval County Schools resisted the process for decades, despite court interventions, busing, and loss of accreditation. The courts finally deemed the local school system desegregated in 1988. Nearly one-fifth of black students in Jacksonville still attend a school where at least 90 percent of the student body is Black.