What does progress look like? In regards to the Summer of 1960, the courage, determination, and direct action of dozens of individuals and a few organizations brought about much-delayed progress. Yes, those lunch counters were desegregated, as were most businesses, but some remained deep-rooted in separatism until only recently. Yes, the fallacy of ‘separate but equal’ schools was addressed only after decades of missteps and intentional obstructionism.  The Civil Rights and Voting Rights acts of 1964 and 1965 passed, but are still being stripped today. And for decades, the sacrifices of those who led the change in Northeast Florida were ignored. Sixty years later the light is shining brightly on the importance of THAT moment on THIS moment, proving the adage that this is not a moment, but a movement. And one that seems stubborn to move forward…but we will not stop moving.

With this, we leave you, one last time, with the words of Rodney L. Hurst Sr.:

“Because you cannot see the visible vestiges of racism and segregation, does not mean that racism and segregation no longer exist. Fighting for civil rights today requires the same diligence as it did in the sixties. Believe me, there is still a war to fight. If we are committed to meaningful race relations in Jacksonville, we must have serious dialogue and communication between the white and Black communities. You can compare every racial study completed in Jacksonville over the years, and find that the results are remarkably similar; which means the problems have not changed and this community has not addressed them. If Jacksonville is to reach a level of greatness, men and women of goodwill must continually attack racism at every level. The consequences should not be a consideration.”

View caption: A civil rights marker — a plaque — now stands in James Weldon Johnson Park (formerly known as Hemming Park) attesting to the historical importance of Ax Handle Saturday, and to the courage of the Jacksonville Youth Council NAACP, and its advisor Rutledge Pearson. The plaque notes, “[Ax Handle Saturday] awakened many of the seriousness of the African American community’s demands for equal rights, equal opportunity, human dignity and respect, and inspired further resolve in supporters to accomplish these goals.” The plaque was erected in 2002 by the Florida Heritage Landmark and is sponsored by the Jacksonville Historical Society and the Florida Department of State.

“We’re attempting to address the issues that are wreaking havoc on a section of the city that has been routinely ignored. We’re different in that we are a solution-oriented organization. We are committed to accepting the baton in the relay race of civil rights history. I have always been involved in community affairs, starting at an early age when I used to hold my mother’s hand as she marched in civil rights demonstrations in downtown Jacksonville.” 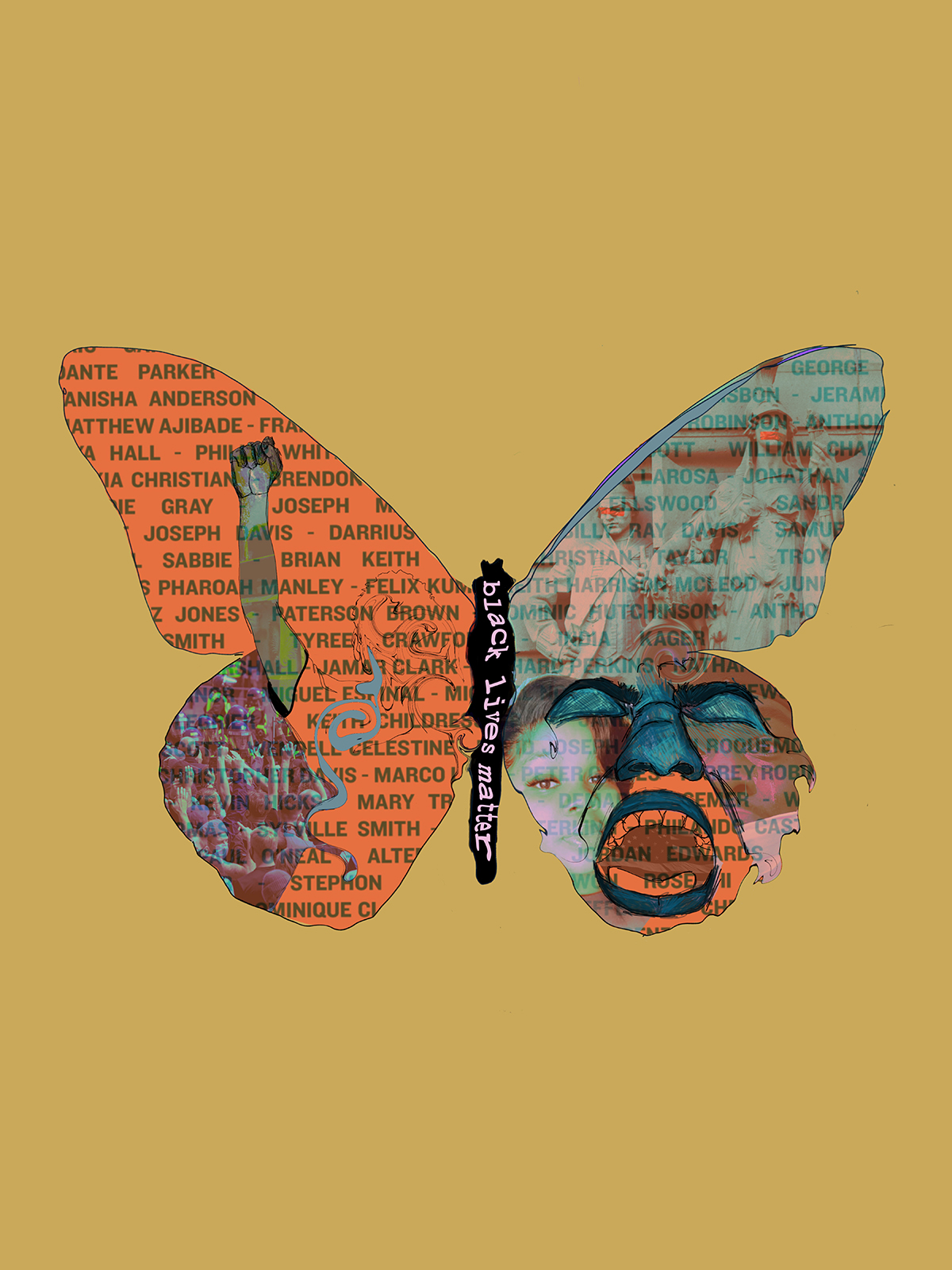 This piece acknowledges the grace and the anguish that presently exist in the same space. Here, the artist speaks to the searing duality of our beautiful and chaotic place in time. 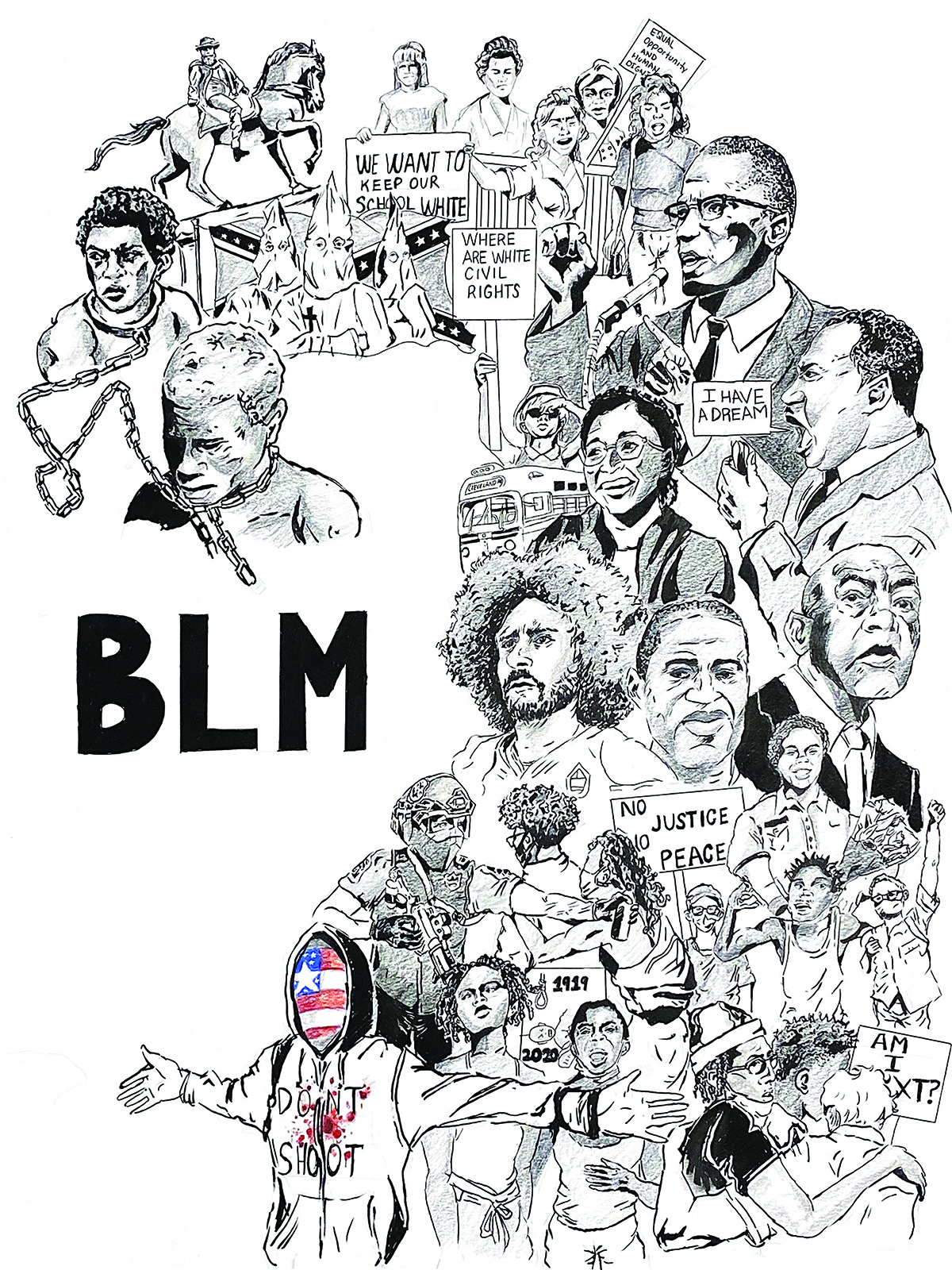 The consistency and cyclical nature of racism throughout our history manifests in this work. This piece provides sharp parallels of tragedy between our past and present, urging us to be aware of our historical patterns. 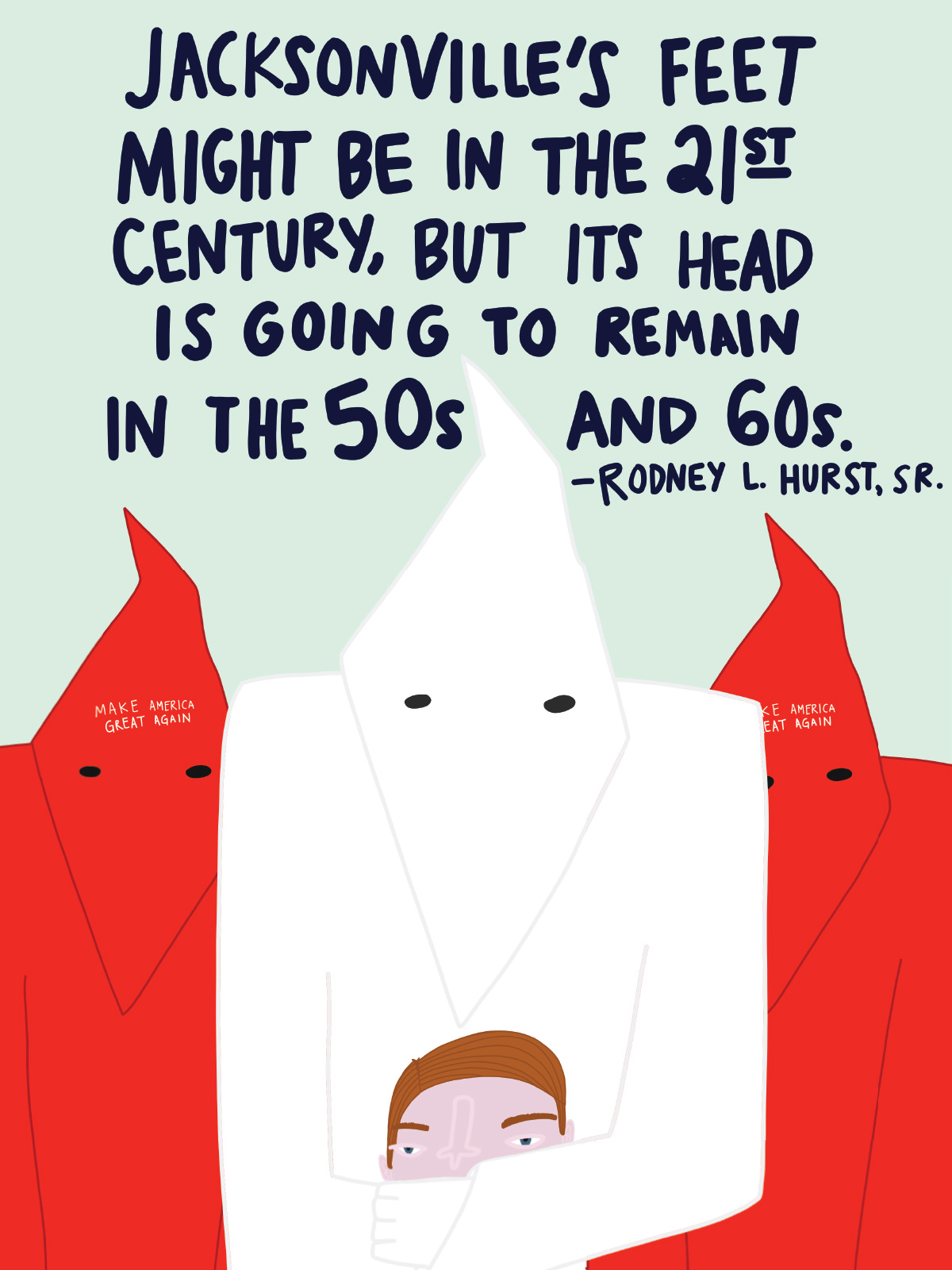 A haunting commentary on Jacksonville’s inability to fully move with time. This work carefully demonstrates the interaction of contemporary ideals with the painful symbols of our history. 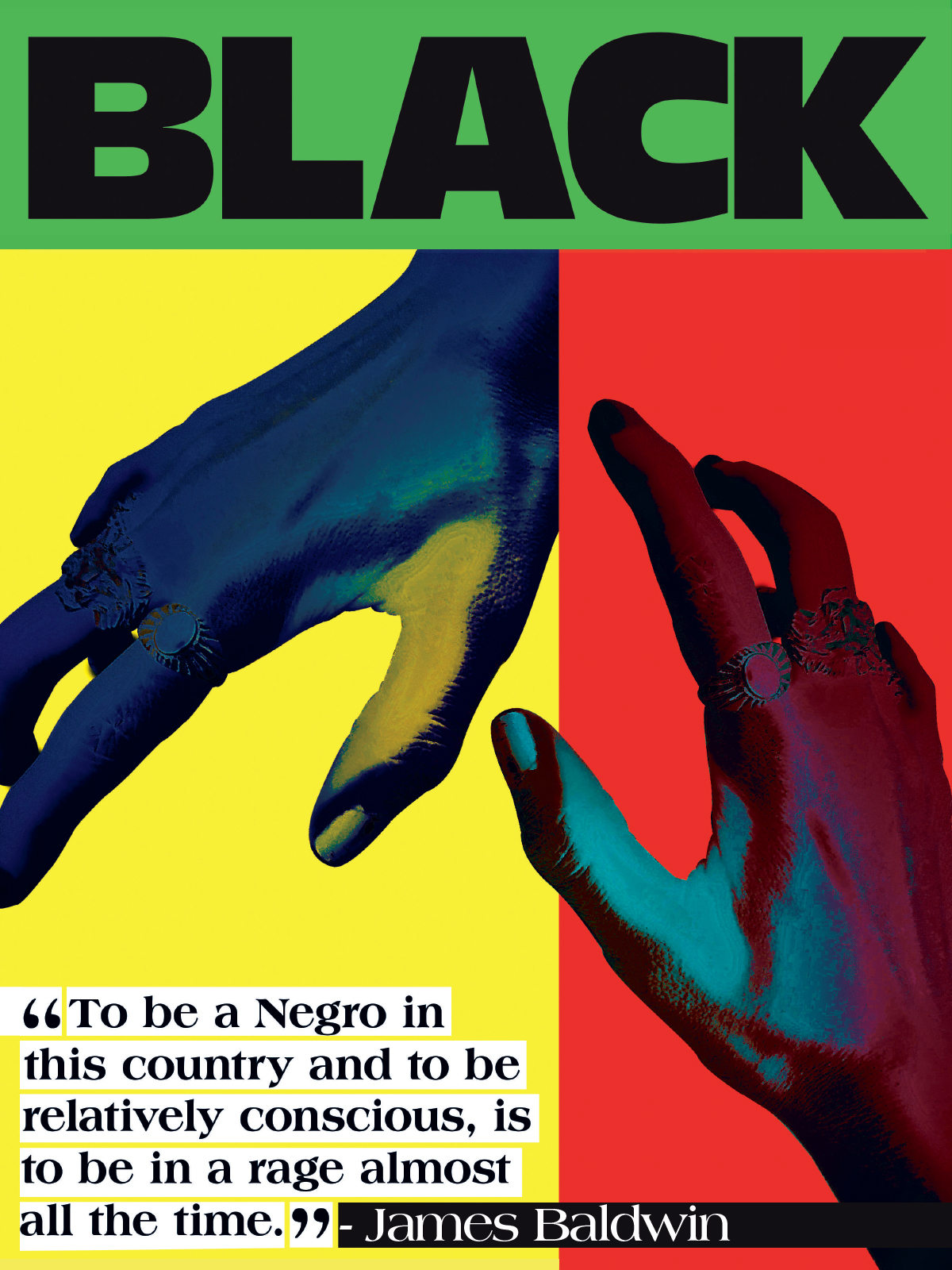 Here, a powerful message and a stunning graphic coexist and reflect the colors of blackness. The artist channels the fury at the base of the revolution into this striking meditation on inherent rage. 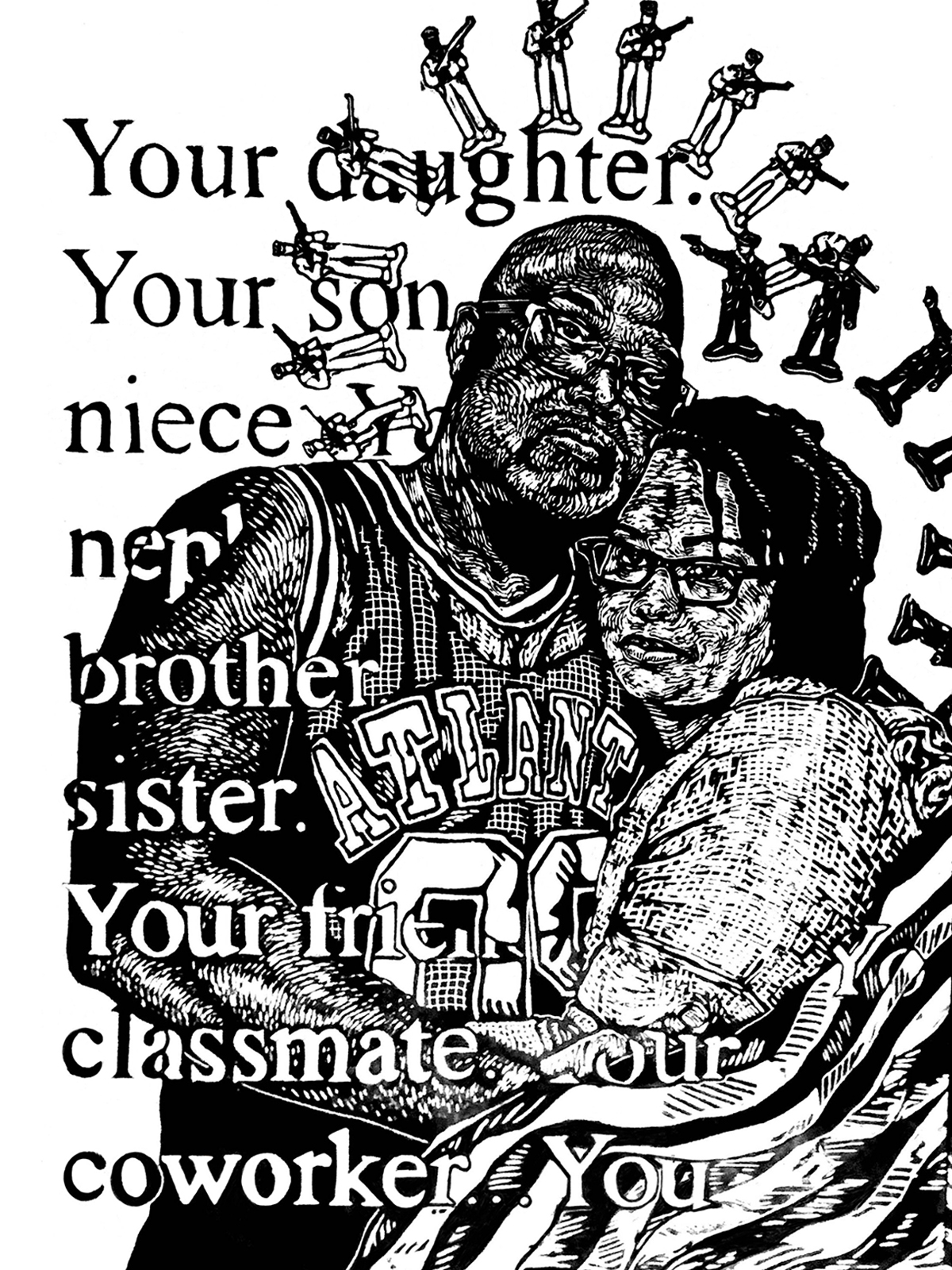 This work makes sheer humanness flood the senses. Radiating in black and white the forgotten humanity of Black lives.

This piece is forthright in its encouragement to vote in the upcoming elections. The artist amplifies the voice of voting as an act of progression in the fight for liberation.